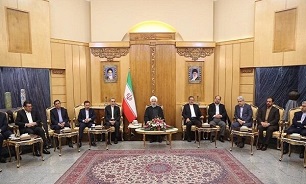 He made the remarks Monday at Mehrabad International Airport, before departing for Iraq.

“Iran can provide many of its needs from Iraq and we have important plans during this visit,” Rouhani highlighted, adding, “the goal of this visit is deepening bilateral relations.”

“Relations between Iran and Iraq are special,” the official website of Iran’s Presidency quoted him as saying, adding, “in the recent years, the people of Iran have passed a test with pride, and that is wherever the people of the region faced a problem and asked for the help of the Iranian nation and government, we rushed to help them.”

“There are many common grounds for cooperation between the two countries. We have been alongside the Iraqi people in their hard times, and today, which is the day of peace and security in the country, we are still by the side of the Iraqi nation.”

“Today, we have good relations and cooperation with Iraq in almost all fields, including transit, tourism, pilgrimage, investment, political, regional and international fields.”

“Today, our economic cooperation amounts to $12 billion a year, and we can easily increase this to $20 billion in the coming years,” said Rouhani.

Touching upon the two sides’ interest in building railroads, he noted, “the issue of transit is of special importance for us.”

Referring to sediment removal of Arvand Rud President Rouhani said, “based on the 1975 treaty, this sediment removal is beneficial for both countries, and the cities of Basra, Khorramshahr, and Abadan.”

On industrial parks, he said, “we have border issues in terms of security and also the environment and dust are important for us, to settle which, joint measures should be taken by both countries.”

“In Baghdad, an economic forum will be held, and we will also have meetings with the nomads, elites, and politicians of Iraq, and we will also make pilgrimage to the holy shrines in Karbala and Najaf,” he said.

Rouhani continued, “We hope that this visit will be beneficial for both nations and countries, bringing about the development of relations between the two countries.”

Elsewhere, pointing to the sneaky visit of US President Donald Trump to Iraq, Rouhani said that ties between Iran and Iraq cannot be compared to Iraq’s relations with an occupying country like the United States.

“The United States is being hated the region. One cannot forget the bombs that Americans dropped over Iraq, Syria and other countries in the region.”