TEHRAN (defapress) – After the conclusion of five agreements between Tehran and Baghdad, Iranian President Hassan Rouhani said the two Muslim neighbors have agreed to lift visa requirements for the citizens of both nations, including pilgrims and tourists.
News ID: 76135 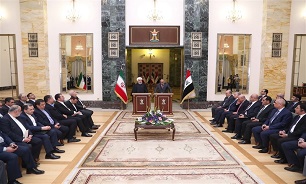 Speaking in a joint press conference with the Iraqi prime minister in Baghdad on Monday, Rouhani said, "In our negotiations with the prime minister of Iraq, we agreed to further develop relations between the two nations, and in doing so, Iran announces that it will not receive any fees for visas, and the Iraqi side will announce that it will not receive any fees, either."

“The Iraqi side currently prefers the visa regime, but there is no payment for a visa, which is a step forward in the process of facilitating the relations between the two nations,” he said.

Rouhani added that the development of trade cooperation was another topic of negotiations, saying, "We agreed that on issues related to preferential tariffs, the two sides continued their negotiations.”

“The third thing that was discussed was standard, and we could agree that the exchange of goods in the fields of agriculture and medicine be done more easily,” the president said.

Unveiling plans for the launch of Shalamcheh-Basra railroad project, the Iranian president added, "Due to the connection of the Iranian railway network with Pakistan, Afghanistan, Turkmenistan, Kazakhstan, Azerbaijan and Turkey, we hope that in the future we will be able to connect the railway between the two countries.”

"On environmental issues, our existing agreements should be implemented more quickly so that we can discuss the issue of dust between the two countries and with other countries of the region,” he stated.

The two countries have good cooperation with each other in energy, the president underscored, adding, “Iran supplies electricity and gas to Iraq, and we have announced that we are ready to export more electricity to the country.”

The president added, “Regarding ​​banking, which is one of the key topics of discussion between the two countries, we emphasized quicker implementation of the agreements between the two central banks.”

“We agreed on the necessary maritime relations and facilities, and we hope that Abadan, Khorramshahr and Basra will have a better use of the border river,” Rouhani added.

The president then referred to the agreements between the two countries in the area of ​​scientific cooperation and said, "I have announced to the prime minister (of Iraq) that in the field of nanotechnology, we will provide some laboratories to a university of their choice.”

“We have also announced that we can equip the universities of their choice, and develop scientific and technological cooperation between the two countries,” said Rouhani.

"We are also interested in developing security relations between the two countries. We have always helped each other in recent years. Iran is proud to have helped the countries of the region, including Iraq, from the first day that the ISIS began their terrorist acts,” he stated.

The president added that the two countries' views on regional affairs are very close, adding, "We hope that the close relations between the Iranian government and people with the people and government of Iraq will enable us to have more security and stability in the region.”

"We have taken good steps in the field of technical and engineering services, and we hope that with the banking and financial measures, this cooperation can continue,” Rouhani’s official website quoted him as saying.

The prime minister of Iraq, for his part, said, "This visit, in our view, is a very important and historic one that aims to mark a different start for the development of relations between the two countries and the two nations.”

Abdul-Mahdi added, “Iraq seeks to further develop relations with the Islamic Republic of Iran in all areas of mutual interest.”

“We are willing to have the best of relations with the Islamic Republic of Iran,” the Iraqi premier went on to say.