Venezuela Says US behind ‘Terrorist’ Attack on Oil Facility

TEHRAN (defapress) - Venezuela says the US and the country’s Washington-backed opposition are behind a “terrorist attack” on an oil facility in the crisis-hit Latin American state.
News ID: 76196 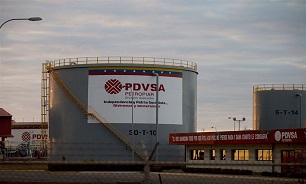 The blaze broke out at the Petro San Felix heavy oil processing plant in eastern Venezuela late Wednesday. There were no reports of casualties.

Speaking to state television, Oil Minister Manuel Quevedo accused the head of the opposition-ruled Congress, Juan Guaido, who has named himself as Venezuela’s interim president, for triggering the incident.

The minister said on Twitter that Guaido and the opposition were "intensifying terrorist incursions" against the state-owned oil company PDVSA to impact Venezuela's vital crude exports, Press TV reported.

Quevedo also accused Guaido of collusion with the United States. "Traitors!" he wrote, adding "the US has decided to rob Venezuela of its oil resources... (and) wants blood to flow."

The US has recognized Guaido as Venezuela’s head of state and has already targeted Venezuela’s oil exports, which account for 90 percent of the country’s revenues, with sanctions.

Washington has also been pressuring other countries to reduce their oil purchases from Venezuela.

The Latin American country has been facing dire economic conditions and months-long protests, with President Nicolas Maduro putting the country’s woes down to US intervention and accusing Washington of attempting a coup against his government.

Guaido named himself interim president in January. Washington took the lead in recognizing his claim followed by the US’ major European allies, including France, Germany, and Britain.

US President Donald Trump has repeatedly said that all options are on the table in promoting Washington’s choice for Guaido over Maduro.

Venezuelan Foreign Minister Jorge Arreaza, meanwhile, told a United Nations meeting in Austria that the US "has threatened our people with a military aggression" and was taking "unilateral economic steps" in the form of sanctions that cost Venezuela billions of dollars.

Russia, China and Iran have opposed US interference in Venezuela. The European Union has also warned against any military action targeting the Latin American nation.

Venezuelans back to work after power restoration

On Thursday, Venezuelans in the capital Caracas and other cities heeded a government call to resume their jobs following successive days of a paralyzing blackout, which the country has likewise blamed on US acts of sabotage.

Employees across the public and private sectors were back in their jobs after the power was restored and the government called on all public sector employees to restart their operations.

Over the previous week, however, the outage had rendered most people unemployed, and reportedly cost the country hundreds of millions of dollars in losses.

Bus and subway stations were brimming with people, while long queues formed in front of banks.

The national industry federation Conindustria said, though, that it would take several days for some activities to return to normal.