TEHRAN (defapress)- French President Emmanuel Macron is expected to oppose the Brexit delay requested by the British PM, Le Point reported. It would block the extension, making a no-deal more likely and result in total failure for Theresa May.
News ID: 76325 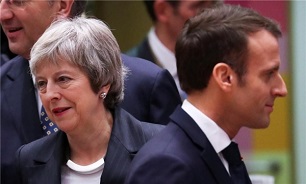 Macron is expected to say no to May’s plea to postpone the Brexit date, the media writes ahead of the meeting at the European Council.

The request for a Brexit extension must be unanimously backed by all other 27 EU members, which means that a strong opposition from a single country is enough to throw the delay under the bus.

Sources within the administration of the French president have repeatedly signaled that Macron would not back it solely to save Britain from a chaotic no-deal Brexit situation.

While May has already asked for an extension, British Parliament has not approved the Brexit plan yet, and it remains unclear whether it will actually do so.

With just days to go, Britain's departure from the European Union was thrown into chaos and doubt as Parliament delivered a crushing double blow to May's Brexit divorce deal and to her authority as leader.

Last Week, lawmakers rejected the deal 391-242, ignoring May's entreaties to back the agreement and end the political chaos and economic uncertainty that Brexit has unleashed. It was a narrower outcome than the historic 230-vote margin of defeat for the agreement in January, before May secured changes from the bloc — but not by much.

At the same time, they have opposed the ‘no-deal’ scenario as well, sending quite mixed signals to the EU.

Britons voted by 52-48 percent in a 2016 referendum to leave the EU, a decision that has not only divided the main political parties but also exposed deep rifts in British society.

While Macron is apparently taking a strong stance on the UK, he faces a still-growing crisis in France. The ongoing Yellow Vest protests are the major issue which the Macron administration has been unable to tackle for several months. The demonstrations were initially sparked by a fuel tax hike, yet promptly overgrew that scope, targeting low wages, income inequality and Macron’s perceived protection of the wealthy establishment.