TEHRAN (defapress) – Chairman of Yemen’s Supreme Revolutionary Committee Mohammed Ali al-Houthi vehemently rejected US Secretary of State Mike Pompeo’s recent claims that Iran sends missiles to Houthis and said instead of such claims, the US should end its aggression on Yemen.
News ID: 76371 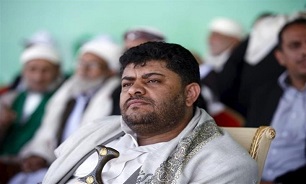 Houthi said after four years of attacks on Yemen, Pompeo has claimed that the war is a proxy one and Iran is firing missiles from the Arabian Peninsula country, the RT Arabic reported.

“I say to the Americans that you should stop your aggression and crimes and the blockade of Yemen so that all forms of Yemeni military defense and all excuses that you make will be removed,” he noted.

“If you are right, enter into battle directly with Iran,” the Houthi leader added.

Speaking to Al Arabiya on Thursday, Pompeo said Iran provides, not only resources, but also missiles to the Houthi forces, adding that he hopes pressure on Iran will convince the Houthis "to return to the political table."

The remarks came as Yemen’s defenseless people have been under massive attacks by the Saudi-led coalition for more about four years but Riyadh has reached none of its objectives in Yemen so far.