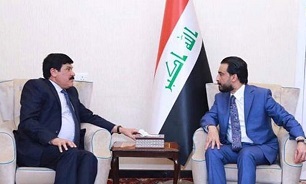 The Iraqi Speaker Mohammad al-Halbousi and Syrian Ambassador Sattam Jada'an al-Dandah on Sunday agreed on reopening the joint border crossings, and emphasized the importance of such move for facilitating trade and movement between the two countries, the Syrian news agency, SANA, quoted Iraqi parliament's statement.

The Syrian ambassador at the meeting affirmed that the relations between Baghdad and Damascus should be enhanced.

“The meeting comes within the common coordination between the two states in order to realize a broader cooperation in the economic, political and security domains,” Dandah told SANA correspondent in a press statement.

The two countries have 605 km joint border. The border crossings between Iraq and Syria were closed due to insecurity when the terrorist group of Daesh (ISIS) was in control of vast areas in the two countries.

Iraq in late December officially announced the defeat of Daesh. In Syria, too, government forces have regained the control of most of the regions from the terrorists.