TEHRAN (defapress)- Romanian President Klaus Johannis rebuked his prime minister, Viorica Dancila, for stating that the Romanian embassy in Israel will be moved from Tel Aviv to Jerusalem.
News ID: 76404 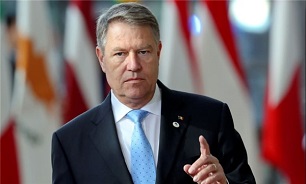 He said that such statements by Dancila shows "total ignorance in foreign policy and in terms of making important decisions of the Romanian state", WAFA reported.

Dancila announced at a meeting for the pro-Israel lobby in the United States, AIPAC, that her country intends to move its embassy in Israel to Jerusalem.

Johannis stressed that such decisions are not for the government to make, rather only him as president can make them.

The decision to move the embassy will be made "with the advice of all the institutions with responsibilities in the field of foreign policy and national security", Johannis stated.

"The final decision belongs to the President of Romania, who is according to the Constitution, the holder of the foreign policy decisions of Romania and a representative of our country at the external level," he added.

Johannis asked "the Government and the Prime Minister to show responsibility in the governing act".