Unmissable sites to visit in Tehran

TEHRAN (defapress) – Considered as the best manifestation of Iranian art and architecture from the Qajar era (19th and 20th centuries), the incredibly lavish Golestan Palace is an intangible cultural heritage of the Iranian capital.
News ID: 76516 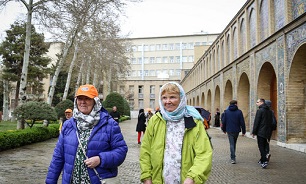 Considered as the best manifestation of Iranian art and architecture from the Qajar era (19th and 20th centuries), the incredibly lavish Golestan Palace is an intangible cultural heritage of the Iranian capital.

The beautiful and colorful architecture is a UNESCO heritage site and is stretched over an area of 4.5 hectares, near Tehran’s traditional Grand Bazaar.

It is one of the oldest historic monuments in Tehran and a masterpiece of beautiful gardens and royal buildings full of Iranian craft collections, where the royal Qajar family used to live for quite some time.

The Golestan Palace is a group of royal buildings that were once enclosed within the walls of Tehran’s Historic Arg (citadel). Its architecture is a mixture of both Persian and European architectural styles, in particular, French.

The complex is made up of 17 buildings with eight key structures. The eye-catching architecture outside is only an introduction into what you will find inside.

It is now a grand complex full of charming Persian art, consisting of gardens, royal buildings, museums and collections of Iranian crafts and European presents.

The palace, with very nice and glamorous halls and rooms, each of which reminds the historical importance of the palace, is indeed a must-see place to visit when you are in Tehran. You will have a better experience if you study about Qajar dynasty before visiting the palace.

Spread over a 180-hectare area, Sa’d Abad complex was built by the Qajars and the Pahlavies (20th century).

The complex includes a natural forest, several streets, qanats, galleries, mansions and museums. Currently, large parts of the complex are museums, which are accessible to visitors.

Some of buildings of the palace include: Ahmad Shah Qajar Palace, the Green Palace, the White Palace, Museum of Natural History, Museum of Fine Arts, Museum of Anthropology, Museum of Glassware and Handicrafts, the Military Museum, the Behzad Museum, Museum of Treasure, and Museum of Mir Emad Calligraphy.

The most famous palaces are the White palace and the Green Palace, which was the residential of Reza Shah Pahlavi, providing visitors with an insight about the lifestyle of the Iranian king as well as various kinds of 1970s' furniture and art crafts.

The complex’s garden is very nice to walk and it leaves you with a memorable day.

One of the most beautiful Iran tourist attractions is the 9000-square meters Niavaran Complex. It was built in the scenic surroundings of northern part of Tehran and was used by the Qajar king Naser-e-din Shah (19th century) as a summer residence.

The Niavaran Palace, completed in 1968, was also the main residence of the last Shah of Iran, Mohammed Reza Pahlavi, and the imperial family until the Islamic Revolution. It seems interesting to discover where the last king of Iran used to watch TV, his children used to play, etc.

The whole complex is inspired by Iranian archeology using modern technology. Like any other royal palaces in Iran, it has breathtaking architecture and decoration.

There are also some famous artworks from Salvador Dali and Picasso. The complex also includes a very big library.