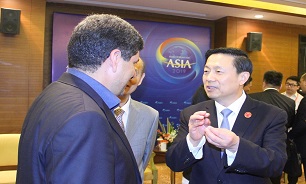 Hashemi made the remarks in a meeting with Vice Minister of the State Council Information Office of China (SCIO) Gua Weimin in southern Chinese city of Boao.

IRNA chief has been in China since March 28 to attend the media leaders’ summit as the main meeting of Boao Forum for Asia (BFA) annual conference that started work on Thursday in south China for three days with participation of over 2,000 political, economic, media and cultural personalities.

In the meeting with Weimin held on the sidelines of summit, Hashemi said conferences like the present one can play an important role in strengthening cultural and media relations among the Asian countries.

IRNA as the most important state news agency in Iran is ready to take necessary step towards that goal, Hashemi added.

Appreciating China's efforts for holding the media leaders’ summit and Boao conference, Hashemi noted that IRNA enjoyed good cooperation with the Chinese media, and the news agency has hosted several media delegations from China in the past year.

He also said the two countries’ rich culture can serve as a good ground for further media cooperation.

Elsewhere in his remarks, IRNA chief invited Weimin to visit Tehran which was warmly welcomed by him.

For his part, the Chinese official said expansion of media cooperation between the two countries is necessary.

Then, Weimin thanked Iran for its active presence in Boao conference and media leaders’ summit.

Boao Forum for Asia is one of the important conferences being held annually with participation of representatives of Asian and world countries.

Established in 2001, BFA is the most important economic conference in Asia.

The main aim behind establishment of BFA, of which Iran is one of the founders, is development of economic cooperation and promotion of scientific and technical relations among countries in Asia-Pacific region.