TEHRAN (defapress)- Mongolian Foreign Minister Damdin Tsogtbaatar in a message to his Iranian counterpart Mohammad Javad Zarif extended his condolences on the occasion of the devastating floods in Iran.
News ID: 76622 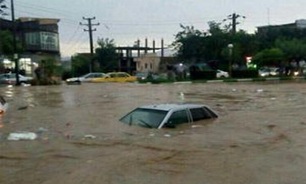 "Our mind and heart are with the families who lost their loved ones in the incident," Tsogtbaatar said while offering his deepest condolences on the sad occasion.

The Mongolian foreign minister, however, expressed his certainty that the Iranian government would overcome the current hard situation.

Several foreign dignitaries, including Head of the Catholic Church and Sovereign of the Vatican City State Pope Francis as well as ambassadors of the UK, Norway, Austria and the UN Information Center (UNIC) in separate messages have already expressed their condolences over the deadly incident.

According to the forensics officials, the recent floods across Iran have left 62 people dead so far.