TEHRAN (defapress) – Several Islamic resistance groups in Iraq condemned the US for labeling Iran’s Islamic Revolution Guards Corps (IRGC) as a “terrorist group” and said Washington is the number-one supporter of terrorism around the world.
News ID: 76799 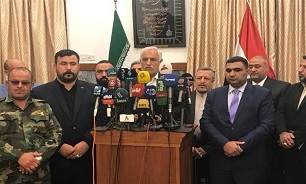 Representatives of the Iraqi groups visited Iran’s consulate in the holy city of Najaf on Saturday and decried the recent decision by the US administration to blacklist the IRGC, local Iraqi reports said.

Speaking at the gathering, a senior official of Iraq’s Badr Organization said, “This move is a ridiculous farce by the number-one supporter of terrorism, the US, which has created Daesh (ISIS or ISIL), al-Nusra and other terrorist groups as admitted by its leaders.”

In a speech on the same day, the spokesman for Iraqi Hezbollah said the US decision to label the IRGC as a terrorist group is in line with attempts to implement the US-Israeli plan called “the deal of century”.

US President Donald Trump announced on Monday that Washington is designating the IRGC a foreign “terrorist organization”, marking the first time the US has formally labeled another country's military a terrorist group.

The SNSC said it has put CENTCOM on its terror list as a “reciprocal measure” against the US “illegal and unwise” move.