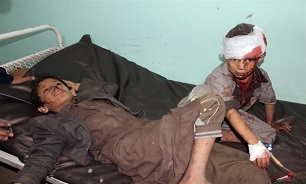 The approvals come two weeks after the German government extended a ban on arms sales to Saudi Arabia, which is spearheading deadly aggression against Yemen.

The security council approved a shipment of "technology for low-bed semi-trailer production" from the Ulm-based company Kamag to France, which will then send a finished product to Saudi Arabia, according to Deutsche Welle.

Further exports will go to the UAE, including German-French-produced accessories for "Cobra" artillery tracking radar systems.

A shipment of three "Dingo" armored vehicles and 168 warheads to Qatar was also approved.

Other shipments include 92 electric drives for the "Fuchs" armored personnel carrier to Algeria, 18,000 detonators for mortar grenades to Indonesia and 3,000 anti-tank weapons to Singapore.

The Left reacted with outrage to the decisions taken by the security council.

She described the approvals as "simply criminal and a violation of current European law."

The UK has also sold at least £5.7bn worth of arms to the Saudi-led coalition that has been attacking Yemen since 2015, according to a Sky News analysis of figures published last month.