Trump’s Decisions Only in Favor of Israel 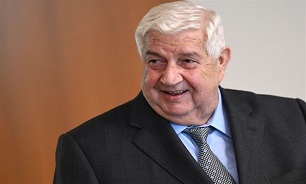 Speaking to the Tasnim News Agency, Muallem decried the US move to label the IRGC as a terrorist group and said Trump knows nothing about “the law or geography”.

“Neither does he have any perception of the situation in the (Middle East) region,” he said, adding, “He makes decisions only in favor of Israel.”

Trump announced on April 8 that Washington is designating the IRGC a foreign “terrorist organization”, marking the first time the US has formally labeled another country's military a terrorist group.

On the eve of the Israeli parliamentary elections last week, Prime Minister Netanyahu took credit for Trump's decision to blacklist IRGC. "Thank you, my dear friend, President Donald Trump," Netanyahu tweeted in Hebrew, "for answering another one of my important requests."

Elsewhere in his remarks, the Syrian top diplomat hailed Iranian Foreign Minister Mohammad Javad Zarif’s recent trip to Damascus and said the visit was made at the right time to deepen bilateral relations between the two countries.

Heading a ranking diplomatic delegation, Zarif paid a visit to Damascus on Monday to attend meetings with top Syrian officials.

Later, he left for Turkey’s Ankara to hold talks with senior officials of the country about issues relating to Syria and North Africa.

His two-day tour of Syria and Turkey is aimed at the coordination of policies on the regional and international developments in order to ensure peace and stability in the region.