TEHRAN (defapress) – The Speaker of the People's Council of Syria, Hammouda Sabbagh, while hailing Iran for its help in the fight against terrorism, has called for its participation in the country’s reconstruction process.
News ID: 76924 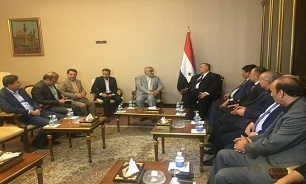 The Speaker of the People's Council of Syria, Hammouda Sabbagh, met and held talks with a member of Iranian Parliament National Security and Foreign Policy Committee, Alaeddin Boroujerdi, on Friday in the Iraqi capital Baghdad.

“Syria and Iran were together in the fight against terrorism, and now we hope that we will continue to stand together in the reconstruction process following the damages incurred by terrorism,” the Syrian parliamentary official said.

He went on to deem invalid the unjust sanctions imposed by the US on the Iranian nation, highlighting Syria’s resolve to maintain deep-seated and close ties with Iran.

Elsewhere, he denounced the US measures in support of the Israeli regime, vowing that the occupied Syrian Golan Heights will be once again a part of the Syrian territory.

He also voiced hope for meeting his Iranian counterpart Ali Larijani in Damascus in the near future.

For his part, the Iranian senior MP congratulated Syria on its victory against terrorism, and condemned Trump’s unlawful recognition of the occupied Syrian Golan Heights as sovereign Israeli territory.

“Trump’s move about Golan revealed that the plots against Syria are carried out by security and intelligence services of the Zionist regime and the US,” he added.

Boroujerdi is in Baghdad on behalf of Iranian Parliament Speaker Ali Larijani to take part with other representatives of neighboring countries at an inter-parliamentary conference on Saturday.