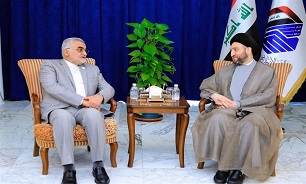 In the meeting, held in Baghdad, Boroujerdi and Hakim exchanged views about the latest political developments in Iraq and the region as well as ways to strengthen ties between Tehran and Baghdad, according to a statement released by Hakim’s office.

Hakim emphasized that Iraq has taken “firm steps” to advance the open door policy in its relations with countries in the region and the world and is working to establish balanced ties with all based on common interests.

Boroujerdi appreciated Iraq's support for the Islamic Republic of Iran and emphasized the importance of efforts to strengthen parliamentary cooperation between the two countries.

Tehran and Baghdad have in recent years ramped up efforts to boost bilateral relations in diverse economic and political fields.

Heading a high-ranking political, military and economic delegation, Iraqi Prime Minister Adel Abdul-Mahdi traveled to Iran earlier this month for his first official visit to the Islamic Republic since he took office.

It came less than a month after Rouhani visited Iraq with a big political and business delegation and signed several agreements with the neighboring nation.

It was Rouhani’s first official visit to Iraq during his tenure.