Pakistan after New Mechanism to Broaden Economic Ties with Iran 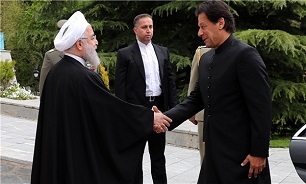 "Pakistan is after finding a mechanism to enhance economic relations with the Islamic Republic of Iran, specially in the oil and gas sector," Imran Khan said in Tehran on Monday.

"Pakistan is after long-term relations with Iran and we should use the abundant potentials existing in the region to this end," he added.

Imran Khan also underscored that Pakistan will no more be a part of any coalition of war, saying, "I opposed the US interference and military deployment in Afghanistan and Iraq since day one, and today I strongly oppose occupation of Golan (Heights), declaration of Quds as Israel's capital and the US unilateral withdrawal from the (2015) nuclear deal (with Iran) and consider it as a violation of international law."

President Rouhani, for his part, stressed strengthening economic and banking relations between Tehran and Islamabad, and said, "Iran and Pakistan will not allow others to interfere in their friendly and brotherly relations on their path to strengthen and consolidate ties."

He noted that the US has inflicted the most damages on regional security and economy by its military interventions, saying, "Under the current circumstances, the regional states should decide and plan for their interests independently and directly."

The Pakistani prime minister was welcomed by provincial officials in Mashhad city. He then went on a pilgrimage at the holy shrine of Shiite Islam's eight Imam, Hazrat Ali Ibn-e Moussa Al-Reza, during his several-hour-long visit to the Northeastern Iranian city. Thousands of Pakistani Muslims visit Mashhad each year to visit the holy shrine.

The visit is taking place at the invitation of President Rouhani. This is the first trip of the Prime Minister to Iran.

Imran Khan is heading a high-ranking politico-economic delegation consisting of Pakistani minsters and other senior officials.

The premier arrived in Tehran late Sunday night to take part in a number of meetings with senior Iranian officials, including Supreme Leader Ayatollah Seyed Ali Khamenei and President Rouhani, on Monday.

Expansion of bilateral economic and political relations as well as enhanced efforts to combat terrorism is on the agenda of talks.