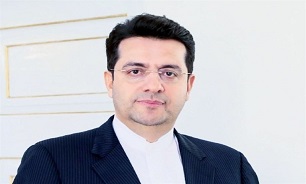 "The huge number of votes Mr. Zelensky won in the recent presidential elections shows the trust Ukrainian people have in him, and the great social capital he enjoys," Abbas Mousavi said in a statement on Monday.

He also expressed hope that the latest developments would result in further success and prosperity for the Ukrainian people and leaders in future, and in the establishment of calm and sustainable peace in the country and the region, the Foreign Ministry’s website reported.

Mousavi also hoped that the election of Zelensky would lead to an expansion of bilateral relations between the Iranian and Ukrainian nations.

Zelensky, whose only previous political role was playing the president in a Ukrainian TV show, trounced incumbent Petro Poroshenko by taking 73.2 percent of the vote.

Zelensky said he wanted to "reboot" Western-brokered peace talks that have so far failed to end the conflict.

The Ukrainian president has strong powers over defense, security and foreign policy but needs backing from parliament to push through reforms.