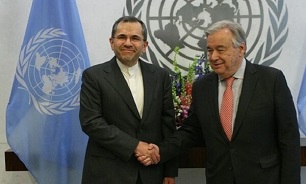 Takht-Ravanchi conveyed greetings of Iranian President Hassan Rouhani and Foreign Minister Mohammad Javad Zarif to Guterres and officially embarked on his mission at the UN.

He will fill the position which had remained vacant for months after the former envoy to the UN, Gholamali Khoshroo, stepped down in late 2018.

Before his mission to the UN, Takht-Ravanchi was Iran’s deputy director of the presidential chief of staff.

Takht-Ravanchi had served as Iran’s envoy and deputy to the UN in 1990s.

He has also served as the deputy foreign minister for Europe and American affairs, and ambassador to Switzerland.