TEHRAN(defapress) – Iran, Turkey, and Russia condemned Fri. the US' decision on occupied Syrian Golan Heights in a joint statement after the 12th round of Astana meetings on Syria in the Kazakh capital.
News ID: 77059 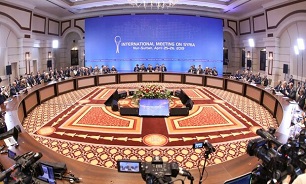 The three guarantor countries of the Astana process – Iran, Russia and Turkey – held the 12th round of Astana meetings on Syria in Kazakhstan's capital Nur-Sultan on Friday, during which they stressed their resolve to continue their fight against terrorism in the Arab country.

In a joint statement released at the end of the meeting, the sides reaffirmed their strong commitment "to the sovereignty, independence, unity and territorial integrity of the Syrian Arab Republic and to the purposes and principles of the UN Charter."

"The Islamic Republic of Iran, the Russian Federation and the Republic of Turkey as guarantors of the Astana format ... strongly condemned the decision of the US administration to recognize Israel’s sovereignty over the occupied Syrian Golan Heights, which constitutes a grave violation of international law, particularly the UN Security Council Resolution 497, and threatens peace and security in the Middle East,” the statement said.

On March 25, US President Donald Trump signed a presidential proclamation officially recognizing the highlands on the border with Syria as Israel's territory, which was condemned by the UN Security Council. Israeli regime seized the Golan Heights from Syria during the 1967 Six-Day War -- an action unanimously rejected at the time by the UNSC.

The Syrian guarantor states also reaffirmed their commitment to the earlier reached agreements on the Syrian province of Idlib, including those on joint patrols and the Joint Coordination Center.

"[The guarantor states] reviewed in detail the situation in the Idlib de-escalation area, welcomed steps taken in order to implement the memorandum of September 17, 2018 and reaffirmed the determination to fully implement the agreements on stabilization in Idlib, including the coordinated patrols and effective functioning of the Joint Iranian-Russian-Turkish Coordination Center," the statement added.

The Astana talks support the establishment of the UN-backed constitutional committee in Syria as a way to find a political solution.