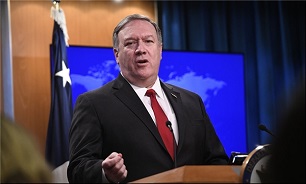 “The support we’re providing to the Saudis as they attempt to engage these dangerous missiles systems is in America’s best interest,” Pompeo said, reffering to missile attacks launched by Yemen’s popular Ansarullah movement, which is defending the country against the Saudi-led invasion, according to the The Hill on Monday.

Seeking to deter the Saudis from further attacks, Ansarullah has targeted a number of strategic Saudi installations, including airports.

“Airplanes flying through King Khalid International Airport in Riyadh are at risk, and the United States has an obligation to protect our citizens,” Pompeo added.

The US has been generously providing arms support for the kingdom and its allies during their onslaught against Yemen. Washington has also provided the coalition logistical assistance, including bombing coordinates.

Washington's support for Riyadh's war, however, has come under increasing scrutiny in Congress ever since the murder of Saudi journalist Jamal Khashoggi at the kingdom's consulate in Istanbul, Turkey last October.

Earlier this month, the US President Donald Trump vetoed a congressional war powers resolution against US support for the war. Backers of the resolution believe the American involvement is an act of war and, therefore, needs approval from Congress.

Saudi Arabia and a number of its regional allies launched the devastating campaign against Yemen in March 2015, with the aim of bringing the former Saudi-sponsored government back to power.

Earlier this month, the Armed Conflict Location and Event Data Project (ACLED), a nonprofit conflict-research organization tracking casualties in Yemen, announced that the death toll from the Saudi-led war surpassed 70,000 deaths, with more than 10,000 being killed in the five last months alone.

The UN has warned that a record 22.2 million Yemenis are in dire need of food, including 8.4 million threatened by severe hunger. According to the world body, Yemen is suffering from the worst global famine in more than 100 years.

Pompeo also claimed that Russia would seek to interfere in American elections for decades to come, after allegedly meddling in the 2016 presidential elections.

In an interview with The Hill, Pompeo waned that Washington would try to thwart Moscow’s efforts to influence future elections in the US.

"It goes without saying, they were a threat to our elections in 1974, too, and they interfered in our elections in the '80s," Pompeo said, adding, "And we should expect in 2050, the Russians will be at it still."

The top US diplomat stated that Trump "has directed us all to be incredibly focused" on countering meddling by Russia as well as other adversaries.

The investigation by US Special Counsel Robert Mueller, which had cast a shadow over Trump since he took office, claims that Russia attempted to influence the 2016 US election but did not find that the Trump election campaign colluded with Moscow.

US intelligence agencies claim Moscow meddled in the election with a campaign of email hacking and online propaganda aimed at sowing discord in the United States, hurting Democratic presidential candidate Hillary Clinton and helping Trump.

Russia denies election interference and accuses the US of illegal interference of its own in the domestic affairs of countries such as Venezuela.