TEHRAN (defapress)- The Syrian Army backed by the Russian Air Force warded off attacks by the ISIL and Tahrir al-Sham al-Hay'at (the Levant Liberation Board or the Al-Nusra Front) terrorist groups on Northern Hama, killing tens of them, the Arabic-language media reports said.
News ID: 77132 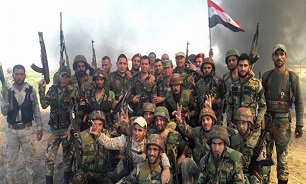 The Syrian Army troops engaged in fierce clashes with terrorists of Ansar al-Tawhid (affiliated to the ISIL) who had attacked military points in Qala al-Maziq in Northwestern Hama, killing and injuring over 20 others, the Arabic-language Russian Sputnik News Agency reported.

The report, meantime, said the Russian fighter jets pounded the military points and movements of the terrorists in al-Janabereh, Tal Havash and Qala al-Maziq, destroying several of their military positions and forcing others to retreat.

The Syrian Army's artillery units also pounded the movements of Tahrir al-Sham from al-Latamaneh and Hasrya towards military points in Northern Hama, inflicting heavy losses on them.

In a relevant development on Monday, the Turkey-backed terrorists blocked a strategic highway in Northern Syria in contravention to the implementation of the Sochi Agreement.

The Ankara-backed Jeish al-Izza militant group closed the Idlib-Hama Highway and prevented patrols by the Turkish and Russian troops in the region, media reports said.

The reports quoted Jeish al-Izza Commander Mostafa Ma'arati as saying that his militants have prevented the Russian troops from entering the areas under their control, warning that they will come under fire.

They also reiterated that Jeish al-Izza has reinforced its military positions in areas along the highway and they have prepared for attacking the military points and centers of the Russian Army.

The Arabic-language al-Watan newspaper quoted Spokesman of Ankara-backed National Liberation Front (NFL) Mostafa Naji as saying that they will not allow the Russian troops to enter the areas under their control and also their contact lines with the Syrian Army.