TEHRAN (defapress) – Iranian Oil Minister Bijan Namdar Zanganeh warned the Organization of the Petroleum Exporting Countries (OPEC) could collapse due to unilateral moves by some of its member states.
News ID: 77185 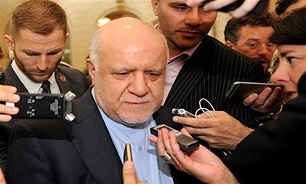 Speaking to reporters after a meeting with OPEC Secretary General Mohammed Sanusi Barkindo in Tehran on Thursday, Zanganeh said in the session, he discussed the problems facing the global oil market.

“I told Mr. Barkindo that OPEC is at risk due to unilateralism by some members and that the organization is likely to collapse,” he added.

“Iran is a member of OPEC because of its interests, and if some other members want to threaten Iran, Iran will not let it go unanswered,” the oil minister went on to say.

The remarks came as US President Donald Trump’s administration on Thursday stopped issuing waivers that allowed some countries to continue buying Iranian oil.

In remarks on April 24, Leader of the Islamic Revolution Ayatollah Seyed Ali Khamenei said the US’ attempts to block the export of Iranian oil will get nowhere as Tehran will be exporting any amount of crude it needs and wants.

In April, the White House said Trump “has decided not to reissue” waivers regarding sanctions against countries importing Iranian oil when the waivers expire in early May.

US Secretary of State Mike Pompeo said at the time that Saudi Arabia and the United Arab Emirates, both OPEC members, have agreed to “ensure an appropriate supply (of oil) for the markets” in order to make up for the loss of Iranian oil in the global market.