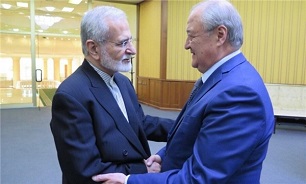 Kharrazi and Kamilov, in their Thursday meeting in Uzbekistan’s capital city of Tashkent, exchanged views on the security provisions to counter the threats posed by terrorism, specially after the ISIL’s Relocation to Afghanistan.

It was cautioned that the ISIL terrorists will cause serious security problems for the Central Asia, asserting that the new threats necessitate more security cooperation between the countries of the region to exchange intelligence and prevent heinous incidents.

Iran and Uzbekistan should recognize their common cultural identity and build their modern civilization based on it, the former Iranian foreign minister said.

The relationship between the two countries is on the growth and development track, Kharrazi added.

Iran and Uzbekistan enjoy a rich cultural and civilization heritage, he said, adding, “When different Uzbek cities such as Samarkand, Bukhara and Khwarazm are listed, we observe that each of these cities was home to distinguished and outstanding scientists.”

Elsewhere in his remarks, Kharrazi touched upon the way of construction of road and rail infrastructures between the two countries and proposed, “setting up an airline, which can connect capitals of the two countries directly, is essential.”

To prevent regional threats and hazards, a comprehensive roadmap should be formulated between the two countries, he said, adding, "Uzbekistan is ready to cooperate with Iran to establish security and stability in the region."

Iran on many occasions has warned of the threats and dangers posed by the transfer of ISIL terrorists to Afghanistan.

"The problem of terrorism has not terminated yet, of course, and it is possible that the terrorists create problems for the regional people in different forms because the Americans have hatched a new plot against the region and are transferring the terrorists to Afghanistan, Central Asia and the Caucasus," President Rouhani said, addressing the Iraqi elites, tribal leaders and religious leaders in Baghdad on March 12.

He noted that the regional nations with their resistance showed to the world that the arrogant powers are the main sponsores of the terrorists providing them with money and arms, and that they plunder the regional countries' historical monuments and antiques and sell them in the market.

"Everyone is aware that the western powers have not played a role in annihilation of the terrorists and have only conducted theatrical operations with their planes and helicopters," President Rouhani said.

Also, earlier in March, Lieutenant Commander of the Iranian Army's Air Force Brigadier General Ali Shadmani warned China, Russia and other regional states of the US attempts to relocate the ISIL terrorists to Afghanistan.

"The enemy is today attempting to continue the same ISIL plot implemented in Iraq and Syria in Afghanistan and this will harm China, Russia and all the regional states," General Shadmani said.

He noted that certain Arab rulers were supporting the US financially and logistically to transfer the ISIL to Afghanistan, saying that they were making their last-ditch efforts to attain their goals but they would not because the ISIL's body had collapsed.

Also, late in January, Supreme Leader of the Islamic Revolution Ayatollah Seyed Ali Khamenei expressed deep regret over the massacre of the Afghan people in terrorist attacks, blaming the US for the tragedies by transferring the ISIL terrorists to Afghanistan to guarantee its presence in the region.

"The US goal of transferring the ISIL terrorists to Afghanistan is justification of its continued deployment in the region and establishment of security for the Zionist regime," Ayatollah Khamenei said, addressing the Iranian seminaries in Tehran.

"The same hands which used the ISIL as a tool to oppress and commit crimes against the people in Syria and Iraq by its creation, is today after transferring the ISIL to Afghanistan after sustaining defeat in those regions, and the recent massacres are actually the start of this plot," he added.

Ayatollah Khamenei said that the US-backed terrorists don’t differentiate between the Shiites and Sunnis, and added, "The US wants this region not to see good days and wants the regional governments and nations to be busy with their own affairs so that they don’t think of opposing the evil agent of arrogant powers that is Zionism."

He described the United States' other goal of creation of insecurity as justification of its presence in the region, and said, "The Americans, themselves, are the main cause for insecurity in Afghanistan and the killings in this region since 20 years ago under the name of religion were carried out, directly or indirectly, by the US agents, and they are now after guaranteeing their presence by fomenting insecurity and attaining their political and economic objectives."

"Enemies of the security and tranquility of the region in an organized move are after fomenting insecurity at the shared borders to transfer the defeated ISIL terrorists to Afghanistan and support the spread of Takfiri terrorism in the country to ignite the flames of war, bloodshed and insecurity in the region once again," Shamkhani said during a meeting with the Afghan president in Kabul.

He cautioned that ignoring the threat could end up in re-experiencing the bitter incidents which happened in Iraq and Syria.

Shamkhani also described the US forces' withdrawal from Afghanistan as a golden opportunity to strengthen the Asian country's defense and military capabilities, and said, "The regional nations are counting each moment for a full withdrawal of the US forces as their deployment has resulted in nothing, but war and insecurity."