TEHRAN (defapress)- Advisor to the Iranian Parliament Speaker Hossein Amir Abdollahian said on Sunday that the US Support for Israel will not change the “doomed destiny” of the occupiers, asserting that the resistance movement will put an end to the occupation of Palestine by the “ominous Zionist government”.
News ID: 77235 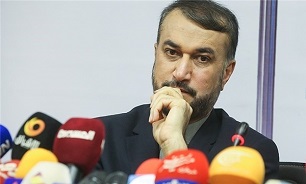 Amir Abdollahian, who also acts as the Secretary General of the International Conference on Supporting Palestinian Intifada (Uprising), warned that all the supports of the US government for the “Zionist regime” will be ineffective to put away the destined fate of the “regime”.

He also condemned the “brutal” bombardment of the residential areas of Gaza strip by Israeli air strikes, and added that international community's continued silence and some Arab countries’ compromise with Israel have made Tel Aviv more audacious in murdering defenseless women, children and men of Gaza.

Israeli fighter jets carried out more airstrikes on Sunday in a continued aggression for the third day on the Gaza Strip, claiming the lives of two more Palestinians in the Gaza City neighborhood of Shujaeya, medical sources announced.

It brings up the number of Palestinians killed since the beginning of the Israeli air and artillery strikes on Gaza late Friday to at least 11, including a pregnant mother, her 14-months-old daughter, and her six-months-old unborn baby.

The Israeli escalation on Gaza started on Friday evening when Israeli troops killed two Palestinian protesters taking part in the weekly demonstrations across the border.