TEHRAN (defapress) - North Korea on Thursday described its firing of rocket artillery and an apparent short-range ballistic missile over the weekend as a regular and defensive military exercise and ridiculed South Korea for criticizing the launches.
News ID: 77307 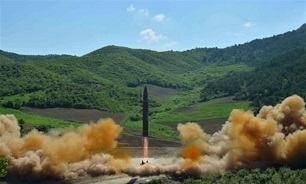 A separate statement by a North Korean foreign ministry spokesman, also unnamed, described the launches as a "routine and self-defensive military drill." It said Pyongyang has been demonstrating "maximum patience" over the impasse in nuclear talks with Washington and that "baseless allegations" against the North's legitimate exercise of sovereignty and self-defense rights would threaten to push things toward a direction "neither we nor they want to see at all", AP reported.

South Korea's presidential Blue House and Defense Ministry have raised concern that Saturday's launches went against the spirit of an inter-Korean military agreement reached last year to cease all hostile activities and urged North Korea to refrain from acts that could escalate tensions.

The launches, which likely represented North Korea's first ballistic missile test in more than 500 days, were clearly a sign of Pyongyang's frustration at stalled diplomatic talks with Washington meant to provide coveted sanctions relief in return for nuclear disarmament. Following the collapse of his summit with President Donald Trump in February, Kim said he was open to a third meeting with Trump, but only if Washington offers mutually acceptable terms for an agreement by the end of the year.

Saturday's drills also highlighted the fragility of the detente between the Koreas, which in a military agreement reached last September vowed to completely cease "all hostile acts" against each other in land, air and sea.

The North Korean statements implied that the launches countered joint military drills by the United States and South Korea in March and April. The North also criticized the test of a US Minuteman intercontinental ballistic missile from a US Air Force base in California last week.

While the United States and South Korea have replaced their annual large-scale military exercises with smaller ones since last year to create room for diplomacy, the North has still criticized the South for continuing joint drills with the United States.

The statement by the North Korean spokesman for the office in charge of military talks with South Korea said the South's "war-thirsty" military has "no qualification" to vilify the North and question its commitment to the inter-Korean military agreement. It said South Korea recently staged a "provocative combined air drill with the US" and kept silent about the Minuteman test, which it said was meant to threaten the North.

"The (South) Korean military regards the combined air drill they staged together with the United States and the US intercontinental ballistic missile as an acrobatic flight and fireworks, but deem the tactical guided weapon of the fellow countrymen a bolt from the blue," said the statement.

It added: "The close examination of the military agreement will make them feel guilty of their provocative acts ... and deprive them of the 'courage' to take issue with the dialogue partner. And they will be careful in speech. Otherwise, they will be subject to a pelting rain of kicks and blows."

The statement by the North Korean foreign ministry spokesman said the labeling of the North Korean military drill as provocative is an "undisguised manifestation of the attempt to press the gradual disarmament of our state and finally invade us."

South Korea's Joint Chiefs of Staff has not confirmed whether the North fired a ballistic missile, but said a "new tactical guided weapon" was among the weapons tested by the North, which also included 240 millimeter- and 300 millimeter-caliber multiple rocket launchers. The JCS said the various projectiles flew from 70 to 240 kilometers (44 to 149 miles) before splashing into the sea.

Experts who analyzed photos from the North Korean state media say it's clear the North tested a new solid-fuel missile that appears to be modeled after Russia's Iskander short-range ballistic missile system.

North Korea last conducted a major missile test in November 2017 when it flight-tested an intercontinental ballistic missile that demonstrated potential capability to reach deep into the US mainland. That year saw a string of increasingly powerful weapons tests from the North and a belligerent response from Trump that had many in the region fearing war.

During the diplomacy that followed those weapons tests, Kim said that the North would not test nuclear devices or ICBMs. The short-range projectiles launched on Saturday don't appear to violate that self-imposed moratorium, and they may instead be a way to register Kim's displeasure with Washington without having the diplomacy collapse.