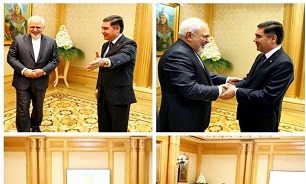 The top Iranian diplomat and the Turkmen leader discussed various aspects of Tehran-Ashgabat bilateral ties and major regional and international developments in the meeting.

Heading a ranking delegation, Zarif is in Turkmenistan for an official visit to boost political and economic relations between the two neighbors.

Iran and Turkmenistan have accelerated efforts in recent years to forge closer partnership in various political and economic fields.

In March 2018, Iranian President Hassan Rouhani paid an official visit to Ashgabat at the invitation of Berdimuhamedow, during which the two sides signed a number of agreements in various fields.