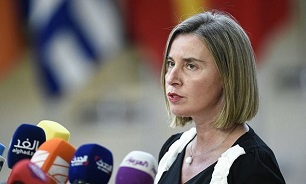 “We will continue to support it as much as we can with all our instruments and all our political will,” Reuters quoted Mogherini as telling reporters before a meeting with the foreign ministers of Britain, France and Germany, who are signatories to the deal.

United States Secretary of State Mike Pompeo is also expected to meet EU officials in Brussels on Monday to talk about the JCPOA, before heading to Russia.

Mogherini said she was informed during the night of Pompeo’s arrival to Brussels where EU foreign ministers are gathered for a regular monthly meeting.

The EU official had told reporters on Thursday that the bloc remains fully committed to the full implementation of the JCPOA, saying so far Iran has been fully compliant with all of its nuclear-related commitments. She also voiced hope that the EU's full commitment to preserve the agreement would contribute to preserve it in the future.

This comes as Iran has given the five remaining parties to the nuclear deal a 60-day ultimatum to comply with their commitments, particularly those regarding Iran’s economic interests in the banking and energy sectors, before the country would start reducing portions of its own commitments to the agreement stage by stage.

EU was supposed to launch a trade mechanism for Iran, called INSTEX, to do business with the Islamic Republic despite US sanctions. The mechanism has yet to become operational.

Iran says at any given time that its demands are met, it will resume complying with the suspended commitments, which have been made impossible to continue due to the US measures and sanctions, according to FM Zarif.

The decision to reduce commitments to the JCPOA comes as Washington is ramping up pressure against Iran, by re-imposing new sanctions, including restrictions on Iran's low-level uranium enrichment and metal industry, and ending the sanctions waivers for Iran’s major oil clients in an attempt to drive the country’s oil exports to zero.

Iran has stressed that it has no intention to leave the JCPOA, and its decision on reducing commitments is still within the framework of the agreement.