TEHRAN (defapress)- Saudi dissident media leaked an internal document of the country's defense ministry which shows their fear and confusion after the recent Yemeni attacks on their vital oil facilities.
News ID: 77411 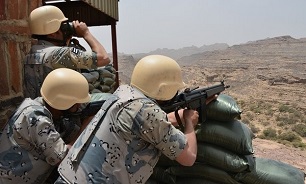 The document released by SaudiLeaks website is a letter signed by Colonel Mohammed bin Nasser al-Harbi, a commander of the Saudi Ground Forces in al-Sharqiyeh region, addressed to his deputy to put all forces on alert in their mission zones within the next 72 hours.

It added that the Saudi commander has ordered the National Guard Forces to be dispatched to al-Sharqiyeh region to protect the oil wells, refineries and ports where the country's crude is exported to overseas destinations. He has also cancelled all leave of absence of all commanders and forces.

The report was released a day after Seven drones of Yemen's armed forces carried out airstrikes on vital oil facilities in Yanbu region after flying deep into Saudi Arabia's airspace on Tuesday, halting the operation of the strategic East-West oil pipeline that pumps some 3 million barrels of oil per day from the Eastern province to the Western parts of the country.

"The extensive military operation was conducted in retaliation for Saudi Arabia’s aggression and siege of the impoverished Arabian Peninsula state," a Yemeni military source told Al-Masirah TV on Tuesday.

The official stated that Yemeni fighters stand ready “to execute more significant and tough strikes as long as the siege continues”.

Al-Alam news network, meanwhile, reported that the goals have likely been oil-related and economic targets in the Red Sea port of Yanbu in the Al-Madinah province in Western Saudi Arabia.

Hours later, member of the political bureau of Yemen's Ansarullah movement Mohammad al-Bukhaiti told Al-Jazeera Arabic that the attacks occurred in the early hours of Tuesday morning, saying he expects the targets to be oil installations, but stated that he had no specific information on the details of the strikes.

Hours later, Saudi Arabia's Presidency of State Security confirmed the report of the Yemeni drone attacks on the kingdom facilities, saying two oil pumping stations belonging to Aramco company in the provinces of Al-Duwadimi and Al-Afif "were partially targeted".

Saudi Arabia's Energy Minister Khalid al-Falih also noted that fire broke out at one station between 6:00 am and 6:30 am local time on Tuesday, saying, however, it caused "limited damage".

He added that Aramco has stopped the pumping operation, where the damage is being assessed, to repair the station and restore the situation to the normal state.

But later in the day, Yemen's Al-Masirah TV released details of the airstrikes, saying that the drones bombed Yanbu oil facilities that is home to some 40 percent of Saudi crude production.

"We have targeted a pipeline that transfers 3 million barrels of crude per day," he added, vowing that the Yemeni army will continue to target strategic facilities in Saudi Arabia.

Later reports disclosed that following the drone strikes on the strategic Yanbu oil pumping facilities, the two oil pumping stations in the provinces of Al-Duwadimi and Al-Afif had also been damaged in separate attacks and were forced to cease pumping operations.

Two pumping stations send Saudi oil produced from its oil-rich Eastern (Al-Sharqiyah) province to the port of Yanbu in the West. The East-West pipeline is of strategic value to Saudi Arabia's oil exports.

Saudi Arabia and a number of its regional allies launched a devastating campaign against Yemen in March 2015, with the aim of bringing the government of former Yemeni President Abd Rabbuh Mansur Hadi back to power and crushing the Ansarullah movement. The Riyadh-led aggression has so far killed at least 20,000 Yemenis, including hundreds of women and children.

France, the United States, the Uinted Kingdom and some other Western countries have faced criticisms over arms sales to the Saudi Arabia and the UAE, whose aggression against Yemen has affected 28 million people and caused what the United Nations calls “one of the worst humanitarian crises in the world". According to the world body, Yemen is suffering from the most severe famine in more than 100 years.