Resistance Fighters Never Give up Arms

TEHRAN (defapress)- The Palestinian Hamas movement described its resistance fighters’ weapons as a red line, strongly denouncing attempts by a number of Arab states and Persian Gulf kingdoms to normalize diplomatic relations with the Israeli regime after years of clandestine contacts.
News ID: 77431 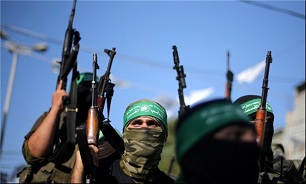 Hamas, in a statement released on Wednesday in commemoration of the 71st anniversary of the Nakba Day categorically rejected all projects aimed at the liquidation of the Palestinian cause or undermining the rights of the Palestinian people, in particular US President Donald Trump’s controversial proposal for peace between the Israelis and Palestinians, dubbed “Deal of the Century”, presstv reported.

The rallies were organized to mark Nakba Day --- or the Day of Catastrophe --- the anniversary of the day when, back in 1948, hundreds of thousands of Palestinians were forcibly evicted from their homeland and Israel proclaimed existence.

Speaking in the occupied West Bank city of Ramallah in mid-April, Palestinian Prime Minister Mohammad Shtayyeh lashed out at Trump’s initiative, asserting that it was “born dead”.

Shtayyeh noted that negotiations with the US were useless in the wake of the country’s relocation of its embassy from Tel Aviv to Jerusalem al-Quds, which Palestinians consider the capital city of their future state.

The United States Middle East Envoy Jason Greenblatt told Fox News television news network in an interview published in May that Trump’s “peace plan” would not be unveiled until at least after the end of the holy Muslim fasting month of Ramadan, formation of a new Israeli administration and the Jewish holiday of Shavuot, known as the Feast of Weeks in English, which ends on the evening of June 10.

He emphasized that the so-called deal of the century has been worked out in a way that it would not endanger Israel, saying, “One thing we won’t do, the Trump administration won’t compromise on Israel’s security.”

Greenblatt then blasted the Palestinian leadership’s decision to dismiss the deal before even seeing it, claiming that he was “hopeful for the sake of the Palestinian people that they get a chance to see it”.

Hamas then called upon the Palestinian people to resist the Tel Aviv regime’s occupation by all means, primarily armed resistance, which is a strategic option to protect the Palestinian nation and restore their rights.

“The weapons at the hands of resistance fighters are a red line, and our people are entitled to work on their development. The process of managing the (anti-Israel) resistance front falls within the framework of countering the Israeli occupation in a way that disrupts the Tel Aviv regime’s equations and guarantees the Palestinian nation’s interests,” the Palestinian resistance movement pointed out.

The statement also roundly dismissed all forms of political, cultural and commercial normalization with Israel.

“Such attempts amount to a stab in the back of the Palestinian nation and a violation of their rights. They also encourage the Israeli enemy to commit more crimes and violations against our people and holy sites (in occupied lands),” it read.

Hamas finally called for a mass and effective participation in all events marking the Nakba Day as well as anti-occupation protests along the fence separating the besieged coastal enclave and the Israeli-occupied territories.

Palestinians have held weekly rallies along the Gaza border to protest the siege on the enclave and demand the right for refugees to return to their homes they fled during the 1948 creation of Israel.

More than 300 Palestinians have been killed by Israeli forces ever since anti-occupation protest rallies began in the Gaza Strip in late March 2018. Over 30,000 Palestinians have also sustained injuries. The Gaza clashes reached their peak in mid-May 2018, on the eve of the 70th anniversary of Nakba Day (Day of Catastrophe), which coincided with a US decision to relocate its embassy from Tel Aviv to occupied East Jerusalem al-Quds.

In June 2018, the United Nations General Assembly adopted a resolution, sponsored by Turkey and Algeria, which condemned Israel for Palestinian civilian deaths in the Gaza Strip.

The resolution, which had been put forward on behalf of Arab and Muslim countries, garnered a strong majority of 120 votes in the 193-member assembly, with 8 votes against and 45 abstentions.

The resolution called on UN Secretary General Antonio Guterres to make proposals within 60 days “on ways and means for ensuring the safety, protection, and well-being of the Palestinian civilian population under Israeli occupation”, including “recommendations regarding an international protection mechanism”.

It also called for “immediate steps towards ending the closure and the restrictions imposed by Israel on movement and access into and out of the Gaza Strip”.