TEHRAN (defapress) –China strongly opposes US unilateral sanctions and understands the conditions and concerns of the Iranian side and protects the legitimate rights of Iran, said China’s Foreign Minister Wang Yi.
News ID: 77452 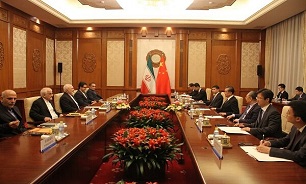 Wang Yi mentioned that a very important situation is emerging in the international community and the region, which is rapidly evolving, adding in this regard, strengthening of Iran-China communications and cooperation is essential.

The nuclear deal protects the authority of the UN and international principles and norms, and the conflicts now linked to a nuclear deal are a clear sign of unilateralism and multilateralism, representing a historical transformation, he stressed.

He appreciated the full implementation of Iran's commitments under the nuclear deal, saying that Iran has shown that it has no desire to leave the JCPOA.

China is willing to cooperate with Iran to confront the intervention and exit from these conditions, Chinese FM noted.

Referring to the Silk Road Program and Iran's active participation in this innovative program, he said that China is interested to cooperate and deepen ties between the two sides and promote bilateral relations.

Iran's Foreign Minister, for his part, mentioned that Iran is not responsible for tensions in relation to the nuclear deal and the Iranian side is not willing to withdraw from this agreement.

Iran is willing to cooperate with China and other relevant parties to implement a nuclear deal and Iran is not interested in war and calls for peace and stability in the Persian Gulf, Zarif added.

Iranian FM highlighted that Iran appreciates China's important role in the nuclear deal and is willing to continue bilateral and multilateral cooperation with Beijing to maintain mutual interests.

Zarif's China trip comes after he visited Turkmenistan, India and Japan in the past week.

China is one of the five remaining parties to the Iran nuclear deal, in addition to Britain, France, Germany and Russia. It is also a major importer of Iranian crude oil and a permanent member of the UN Security Council.

The US sanctions include a ban, imposed last November, on oil purchases from Iran. China is the largest importer of Iranian crude oil. It opposes the decision made by the US to tighten sanctions on Tehran.