TEHRAN (defapress) – Commander of Iran's Army Major General Seyyed Abdolrahim Mousavi said Wed. that Iran will not start any war, but it is fully ready to defend the country.
News ID: 77510 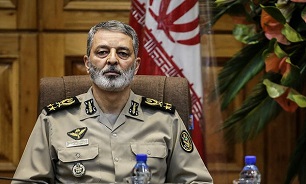 "We are not seeking any war, and we will not start it, but we are fully ready to defend [the nation]," Commander of Iran's Army Major General Seyyed Abdolrahim Mousavi said on Wednesday on the anniversary of the liberation of Khorramshahr from the Ba'hist regime of Iraq in 1980.

The Iranian Army commander advised the leaders of the some regional governments which are backed by the United States to break their alliance with the enemies of their national interests and follow in the footsteps of Iran in pursuing dignity and independence.

He also called on US allies in the region, namely some Arab states to stop being milked by the bullying US.

He further maintained that Saudi Arabia had a hand in recent attacks in Baghdad.

Mousavi further noted that the Iranian nation has chosen the path of resistance in the face of US pressure.