US weaker than ever in the region

TEHRAN (defapress) – The IRGC Deputy Coordinator Admiral Ali Fadavi said that the US is now weaker than ever in West Asia region.
News ID: 77559 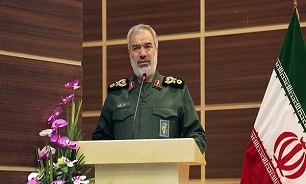 The IRGC Deputy Coordinator Admiral Ali Fadavi said that negotiation with the ‘Great Satan’ (the United States) is fruitless.

The senior IRGC commander mentioned that the US has been present in the region since 1833 and is now it is weaker than ever in West Asia and today, US has the minimum number of naval fleet in the Persian Gulf, so that there is no room to worry since IRGC and Army forces of the country have thorough control in the Persian Gulf, adding that even the US aircraft carrier which was on its way to the region according to the previous plan, remained in the Indian Ocean.

Referring to the US psychological war on Iran, he said that the US actions of designing and planning psychological warfare are an evil act and the Islamic revolution and its followers destroyed the borders of the terrorist groups dependent on global arrogance.

Referring to US troops presence in Yemen, Afghanistan, and Syria Fadavi said the United States Central Command (CENTCOM) and its forces in the West Asia are terrorist.

He further noted that certainly, the Islamic Revolution is now much more powerful than 24 May 1982 (Liberation of Khorramshahr during the Iran–Iraq War).