TEHRAN (defapress) - A new attack by militants from the al-Nusra Front terrorist group was repelled by the Syrian army forces on Tuesday in northern Hama province.
News ID: 77586 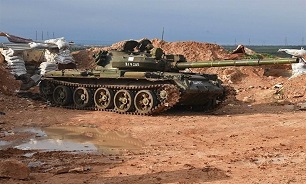 The Syrian government forces have killed ten militants and destroyed a vehicle when repelling an attack by terrorists from the Hayat Tahrir al-Sham group (formerly known as Jabhat al-Nusra) in the Hama province, head of the Russian Center for reconciliation of the conflicting sides Viktor Kupchishin said on Tuesday, Tass news agency reported.

"Over 20 militants from the terrorist group Hayat Tahrir al-Sham, supported by three cross-country vehicles with large-caliber machine guns installed on them, carried out an attack on the settlement of Kafr-Nbuda in the Hama province from the area of the Habit settlement," Kupchishin said.

On the night of May 26, the Syrian army repelled an attack of about 450 terrorists, seven tanks, five infantry fighting vehicles, and 12 off-road vehicles with large-caliber machine guns on Kafr Nabudah. The attack was supported by rocket fire from three MLRS systems.

According to the Russian military, the Syrian government forces destroyed three tanks, two MLRS systems, an infantry fighting vehicle, six off-road vehicles with heavy machine guns and killed about 100 militants in that battle.