Saudis, Emiratis’ behavior to inflict harm on them in long term

TEHRAN (defapress) – The Iranian Parliament Speaker Ali Larijani says that recent summits in Mecca did not yield any result for their host, adding that the behavior of the Saudis and Emiratis will prove to be harmful to them in the long run.
News ID: 77636 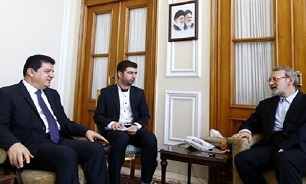 Ali Larijani made the comments in a Sunday meeting with the Ambassador of Syria to Tehran Adnan Mahmoud.

In the meeting, Larijani expressed his regret over the Arab states’ move in getting together against Syria, adding that their coalition failed at the hands of Syria’s resistance.

He added the recent meetings hosted by Saudi Arabia in holy Mecca showed that those Arab states have kept on making their previous mistakes.

The Iranian parliament speaker added that Saudi Arabia failed in achieving its goals through Mecca meetings, expressing his appreciation to Iraqi president and the Syrian government for their support for Iran during the Mecca meetings.

He further noted that Saudis and Emiratis’ behavior will have repercussions and inflict harm on them in the long term.

The Syrian ambassador, for his part, referred to the statement that the Syrian government issued during Mecca summit of Arab states, adding that the recent meetings in Saudi Arabia did not yield any results.

Mahmoud said that the host of the meeting should know that military equipment does not help much in today’s wars against the Resistance Front.

He further noted that any war in the region would not be beneficial for Donald Trump and his votes in the elections as polls show, adding that the Islamic Republic of Iran is the 'strategic basis of the region' and it can manage the situation.

“It is very important today to consolidate the achievements of the Resistance Front in Syria and defeat the US and Trump’s plans,” the Syrian diplomat further noted.