Efforts to Push US Back to N. Deal, Removal of Sanctions Guarantee Success of Abe’s Visit to Tehran

TEHRAN (defapress)- Spokesman of the Supreme National Security Council (SNSC) of Iran Keivan Khosravi said that Japanese Premier Shinzo Abe’s efforts to get the US back to the nuclear agreement and remove Washington’s extraterritorial sanctions are the two principles that can guarantee the success of his upcoming visit to Tehran.
News ID: 77660 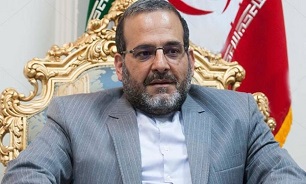 "Iran-Japan relations have always enjoyed a balanced and stable level and progress in political and economic spheres," Khosravi wrote in a memo to FNA on Thursday.

“Japan’s approach in area of foreign policy has mainly been based on support for the legal and political norms approved by the international community,” he underlined, adding that Tokyo “has been in most cases immune to the tides and ebbs of extremism and inactivity in its foreign policy”.

“Preserving and enhancing the political and economic position of Japan in the international system, which is an asset of this country interwoven with the identity of its people, are among the principles that the Japanese fiercely adhere and follow up,” he underlined.

"The upcoming visit of Shinzo Abe to Tehran is assuredly a significant event in the course of bolstering and expanding bilateral relations between the two countries in different areas," the senior Iranian security official highlighted.

“Assuredly the highest executive official of this country will seize the opportunity to boost the political credibility of Japan,” Khosravi underscored.

“It is said that Shinzo Abe is visiting Iran as a mediator authorized by the US,” he highlighted, and stressed, “Efforts to return the US to the JCPOA and make up for the damages inflicted on Iran and removing Washington’s extraterritorial sanctions against our country, which are both from the accepted and reiterated principles of the international community, can act as a guarantee for this visit’s success.”

Shinzo Abe will pay an official visit to Iran in mid-June to discuss bilateral relations, regional and international developments with senior Iranian officials.

The Japanese premier's visit to Tehran will be the first of its kind by a Japanese prime minister over the past forty years.

Abe is scheduled to meet with Supreme Leader of the Islamic Revolution Ayatollah Seyed Ali Khamenei and President Hassan Rouhani during his three-day visit to Tehran.

During a joint press conference with US President Donald Trump in Tokyo in late May, the Japanese premier said he would make efforts to facilitate dialogue between Tehran and Washington. His offer was welcomed by the US president.

Trump unilaterally withdrew from a multilateral nuclear deal with Iran on May 8, 2018, and re-imposed several rounds of sanctions on the Islamic Republic, including a new set of boycotts that include a ban on purchase of Iranian petrochemical products.