TEHRAN (defapress) – The Secretary of Iran’s Expediency Council has warned against Washington’s constant change of rhetoric and threats against Tehran, saying the Americans are well aware that the slightest move against Iran would engulf the whole region.
News ID: 77701 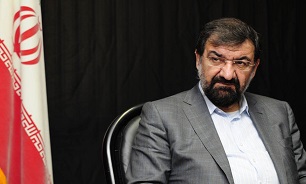 Mohsen Rezaie warned on Saturday that any war against Iran would not stop at the Islamic Republic's borders, and it would undermine the entire Middle East region.

“[US President Donald] Trump and his team have recently said they want to economically pressurize Iran and are not seeking any military confrontation with the country,” Rezaie said.

“This is because they cannot [enter a war with Iran],” he said, adding, “They would if they could.”

The rhetoric and threats of a war against Iran have ebbed because Trump and his administration are well aware of Iran’s defense power and military achievements, and they know that any war on Iran will not remain confined to Iran's borders, Rezaie said.

He also condemned the United States for imposing fresh sanctions on the country’s petrochemical industry, saying that the US policy of maximum pressure, which has repeatedly been tested by former presidents, is a failure.

This is while last week, Trump had claimed he was ready for talks with Iran to reduce tensions.