All sides, not just Iran, need to comply with JCPOA 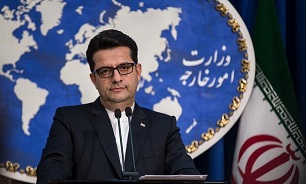 “We are of the same opinion with German foreign minister on the significance of the JCPOA for Europe and the international community; yet, we do not understand his stress on Iran’s one-sided compliance with its commitments to a multi-sided agreement,” Iranian Foreign Ministry Spokesman Abbas Mousavi said Wednesday in reaction to the recent remarks by German Foreign Minister Heiko Maas in Stockholm.

Maas was in Tehran on Monday to discuss ways to preserve the Iran nuclear deal (JCPOA) following the US unilateral withdrawal and the imposition of sanctions on Tehran.

Mousavi went on to add, “since the agreement has several signatories, then all sides need to equally comply with their commitments. If they cannot do so, they need to understand that we can reconsider our commitments to the JCPOA with the use of mechanisms provided by this very agreement.”

“We suggest German foreign minister and others who are concerned over Iran’s recent JCPOA-related decisions to once again carefully study the Article 36 of the agreement and the basics of law,” Mousavi concluded.

On May 8, exactly a year after the US pulled out from the JCPOA, Iran revealed countermeasures to US’ withdrawal, giving the other remaining parties to the JCPOA 60 days to comply with their commitments, particularly those regarding Iran’s economic interests in the banking and energy sectors, before reducing portions of its own commitments to the agreement stage by stage.

Iran has stressed that for now, it has no intention to leave the JCPOA, and its decision on reducing commitments is still within the framework of the agreement, as confirmed by the latest report by the IAEA.