TEHRAN (defapress) – “Ties with China are always strategic for Iran," said Iranian President Rouhani in a meeting with his Chinese counterpart Xi Jinping on the sidelines of the 19th SCO summit in Bishkek, while slamming the US' unilateralism.
News ID: 77757 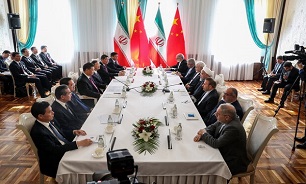 “Relations with China have always been strategic for Iran,” said President Rouhani on Friday in a meeting with the President of China on the sidelines of the 19th Summit of Shanghai Cooperation Organisation (SCO) in Bishkek, Kyrgyzstan.

During the meeting, President Rouhani said that Iran has always lived up to its commitments under the Joint Comprehensive Plan of Action (JCPOA), adding, “the US’ pressures on Iran, China and other countries are aimed at dominating the entire Asia and the world.”

He described the resistance of Iran and China against the United States’ unilateralism beneficial to Asia and the world, adding, “The Iranian people have proved that they will not submit to foreign pressures, but rather become even more united.”

There are many opportunities for development of relations with China, said Rouhani, adding, “Given its exceptional geographical location, Iran is ready to play an important role in the Belt and Road Initiative.”

“Iran is willing to continue energy cooperation with China, and the development of infrastructures for sustainable, strategic relations with China,” he noted.

“Tehran is satisfied with the continuation of cooperation and executing joint projects with Beijing in energy, transportation and industry,” Rouhani said, adding that Iran welcome China’s investment in projects in Iranian southern regions and ports.

He said, “We are willing to further develop our relations and coordination with China in international and regional organizations as well.”

For his part, President Xi Jinping said that Beijing would continue and develop its strategic relations with Iran.

Stating the unilateralism has become commonplace in today’s world, he said that the US’ unilateral withdrawal from the JCPOA is the main factor for escalation of tensions in the region.

The Chinese President also welcomed Iran's cooperation in the Belt and Road Initiative.