TEHRAN (defapress)- The air defense units of the Yemeni Army and Ansarullah Popular Forces shot down a new spy drone of the Saudi-led collation against the impoverished country on Sunday.
News ID: 77851 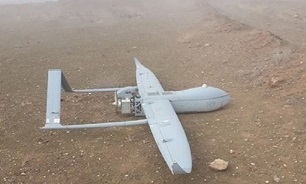 On Saturday, the Yemenis had intercepted and targeted an unmanned aerial vehicle belonging to the Saudi-led military coalition in al-Hajjah governorate of Yemen.

The Ansarullah Resistance Movement announced last night that its Popular Forces in a joint military operation with the Yemeni Army took over the control of a military base of the Saudi-led coalition against the poor country in Saudi Arabia’s Southwestern province of Jizan.

In another development on Friday, the forces of the Saudi-Emirati coalition who intended to cross over the border and enter into Yemen through the Saudi province of Najran were ambushed and repelled. The ambush inflicted heavy casualties on Saudi-Emirati forces with scores of deaths and injuries.

Arabic-language al-Masirah television network reported that the Saudi-Emirati forces were supported by the coalition’s jet fighters but Yemeni artillery units and snipers overpowered the aggressors.