Iran raps US for using dollar as weapon 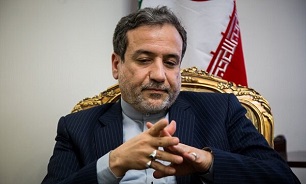 He urged international community to stand against the US’ wrong policy of using the dollar as a weapon against independent governments.

He made the remarks on Thursday in the “International Seminar on Unilateral Coercive Measures and Their Impacts”, held in the Austrian capital Vienna, during which he addressed the US unlawful and unilateral sanctions imposed against the Islamic Republic of Iran.

He called on the international community to confront the US unilateralism and emphasized, “the US’ destructive behavior and economic terrorism against the should be stopped.”

Araghchi added, “with the violation of UN Security Council resolution and exertion of its illegal and unilateral sanctions, the US has greatly jeopardized the sole achievement of diplomacy in the region.”

The “International Seminar on Unilateral Coercive Measures and Their Impacts” was held in the Austrian capital Vienna at the initiative of political missions of Iran, Cuba and Venezuela and in the presence of Venezuelan and Iranian foreign ministers as well as some distinguished international figures.