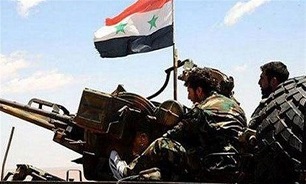 The Syrian Army carried out an assault against the Jeish Al-Izza’s defenses at the western axis of Tal Malah and the nearby town of Jibeen. They also destroyed supply routes of al-Nusra Front terrorists in Abu Raeida, al-Zakat, Hasrya, Lataminah in Hama northern countryside.

In case of purging the remaining terrorist groups in the region, the army will be able to reopen the imperative roadway that links the two government strongholds of Mahardeh and Al-Saqaylabiyeh.

The operation came as the militants in the area keep breaking a peace deal with the government and keep attacking the army positions in interprovincial regions between Hama and Idlib.

Also a day earlier, the Syrian army foiled an attack by al-Nusra terrorists and their affiliated groups on the direction of al-Qasabyia village, which had been liberated by the army in May in Idlib southern countryside.

SANA’s reported that scores of terrorists had been killed, and a number of their vehicles and weapons were destroyed while the remnants of the terrorists withdrew to the north and the northeast towards the villages of B’arabu and al-Naqir.

The army also on Tuesday targeted the terrorists’ positions and their supply routes in Shir Maghar village in Shahshabu Mountain northwest of Hama.