INSTEX 'a beautiful vehicle without fuel

TEHRAN (defapress) – Iran's ambassador to the United Nations noted Saturday that the EU-proposed financial mechanism, INSTEX, is ‘not enough’ and is like a beautiful vehicle without fuel.
News ID: 77923 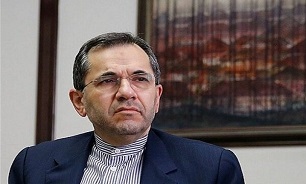 “I personally believe that INSTEX is not enough in the current circumstances. Without money, this mechanism is like a beautiful vehicle without fuel,” said Majid Takht-e Ravanchi at a Friday press conference in Iran’s mission to the UN.

In late January 2018, Europe announced the establishment of a special trade mechanism dubbed as INSTEX (Instrument in Support of Trade Exchanges) in a bid to save JCPOA after the withdrawal of the United States. The mechanism, which is yet to prove its effectiveness, is said to initially cover trades of food, medicine and medical devices and to gradually include other areas.

“We cannot wait anymore. We don’t threaten anybody and don’t issue ultimatums. We have announced our plan to them [European countries] that we will reduce commitments to the deal if they don’t take steps.”

On May 8, exactly a year after the US pulled out from the JCPOA, Iran revealed countermeasures to US’ withdrawal, giving the other remaining parties to the JCPOA 60 days to comply with their commitments, particularly those regarding Iran’s economic interests in the banking and energy sectors, before reducing portions of its own commitments to the agreement stage by stage. Iran says its decision to reduce commitments to the JCPOA, given the current status of the deal, is within its rights under the agreement.

In a Friday statement, the Joint Commission of the Joint Comprehensive Plan of Action (JCPOA) announced that INSTEX had been made operational and available to all EU Member States and that the first transactions are being processed. Meanwhile, Iran stresses that the special-purpose vehicle should cover Iranian oil sales and banking transactions.

“The continuation of the JCPOA with Europe must not be merely within the framework of the INSTEX which only covers non-sanctioned goods and acts in the realm of trade with Europe. But [the INSTEX] must include oil sales and a variety of banking transactions,” Iranian MP Mostafa Kavakebian tweeted on Saturday.