TEHRAN (defapress) – Iranian Interior Minister Abdolreza Rahmani Fazli said the economic sanctions imposed by the US against the Islamic Republic are hampering its efforts to serve refugees and asylum seekers.
News ID: 77933 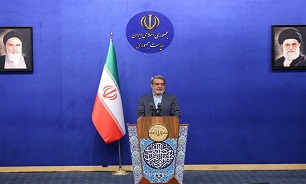 Addressing a ceremony held in Tehran on Monday to mark the National Refugee Day attended by Representative of the United Nations High Commissioner for Refugees in Iran Ivo Freijsen, Rahmani Fazli highlighted problems facing Iran in contributing to UNHCR efforts.

“As you know, the Islamic Republic of Iran has been inundated with millions of refugees and displaced people from neighboring countries over the past four decades,” he said.

“During this period, Iran did not prevent the arrival of large numbers of refugees but, based on its exalted human teachings and religious beliefs, accepted this huge human population beyond its international obligations despite the limited international assistance and the conditions imposed by war and the reconstruction of the country which were followed by cruel sanctions…,” the interior minister added.

“…The cruel sanctions and the American economic war against the Iranian people have created many obstacles to the implementation of the humanitarian programs of the Islamic Republic of Iran and disrupted the services for refugees, on the one hand, and have will have a negative impact on the process of combating drug trafficking, human trafficking, and preventing the flood of migration to other countries, especially Europe,” Rahmani Fazli noted.

The countries which caused the displacement of Afghans must accept responsibility and help cover the costs, he added.

Westerners cannot impose sanctions on Iran and at the same time shirk their responsibilities and expect Iran to bear all costs, the diplomat stated.

“The cause of problems and displacement of Afghan people is not Iranians, but primarily Americans and Westerners and those who created and supported terrorist groups in Afghanistan, deployed military forces and set up military bases there, and made a war in the country,” Araqchi added.

In similar remarks on May 8, Iranian President Hassan Rouhani said Tehran cannot afford the heavy costs of combatting narcotics and addressing the problem of refugees, saying the US measures have disabled Iran from paying billions of dollars in expenses necessary for those plans.

Rouhani underscored that Iran would not pay the costs of the 2015 nuclear deal alone and that all parties have to bear the burden if the nuclear deal is to serve the global and regional peace and security.

The president threatened parties to the Joint Comprehensive Plan of Action (JCPOA) that Iran will have to halt cooperation in the war on drugs and in preventing the influx of refugees if the other parties stand idle and only seek to benefit from the nuclear agreement.