Trump is wrong to withdraw from Iran nuclear deal

TEHRAN (defapress) – Democratic US presidential candidate Tulsi Gabbard believes that Trump’s decision was wrong to withdraw from JCPOA, adding that war with Iran would be "far more devastating" to the US than the war in Iraq was.
News ID: 78003 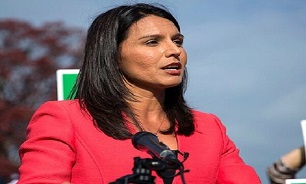 Gabbard said that Trump was wrong to withdraw from the Iran nuclear deal, which was negotiated by the Obama administration. She said that while she was pushing for a "stronger" deal, that it was better than no deal.

The US President was pushing US closer and closer to war with Iran by ripping up that deal, she mentioned.

"Deploying US troops to the region, they basically set the dynamite fuse and lit it, for another war that will be far more devastating than what we saw throughout Iraq," said Gabbard.

Gabbard also said that the US would rejoin the United Nations Human Rights Council if she became president, saying that the US needs to be a "force for good" in the world.

Tensions between Iran and the United States reached a record high after a US spy drone violated Iran’s airspace last month and ignored Iran’s warnings before being targeted by IRGC’s air defense.