TEHRAN (defapress) – "International Atomic Energy Agency (IAEA) has confirmed Tehran's declaration that it is not seeking such weapons," said the spokesman for the Atomic Energy Organization of Iran (AEOI), reiterating the fact that nuclear weapons are not part of Iran's defense doctrine.
News ID: 78049 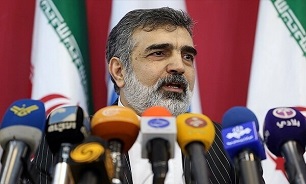 "A country with Iran's strategic and security level and its civilization history doesn't need nuclear weapons," Press TV quoted him as saying.

"The Islamic Republic has never sought nuclear weapons and never will," he underlined.

"The United States will never be able to form a global front against Iran by falsely claiming that the Islamic Republic is looking to develop nuclear weapons," he added.

"Claiming that Iran wants nuclear weapons, America is trying to form a coalition against this country and put Tehran under pressure but these political attempts are in vain," Behrouz Kamalvandi said.

If Trump is sincere then he should remove unilateral sanctions against Iran after hearing the IAEA's confirmations, Kamalvandi added.

Washington and its allies have long tried to use issues such as human rights, terrorism and nuclear energy to project Iran as a threat, he argued.

"However, human rights and terrorism didn't work as they wanted and so they are now using nuclear energy to scare the world," Kamalvandi said.

The official asserted that all aspects of Iran's nuclear activities were covered in Tehran's 2015 nuclear deal with the US, the UK, France, China, Russia and Germany.

Since US President Donald Trump's decision in May 2018 to leave the deal, which is known as the Joint Comprehensive Plan of Action (JCPOA), Iran and the remaining signatories have been working to salvage it in the wake of Washington's sanctions against Tehran.

"What Iran wants is based on its rights in the JCPOA," Kamalvandi asserted.

Kamalvandi also downplayed America's call for an emergency meeting of the 35-member Board of Governors of the IAEA to discuss Iran's nuclear program, which was held in Vienna, Austria on Wednesday.

The meeting request came after Iran reduced some of its commitments under the JCPOA in response to the European signatories' failure to deliver their end of the bargain and protect bilateral trade from US sanctions.

Iran announced this week that it was enriching uranium to 4.5% purity, above the 3.67% limit set by the international treaty.

Trump took the chance Wednesday to repeat hollow threats against Tehran, accusing the country of violating the nuclear deal.

Kamalvandi said that 20% purity was also an option if Iran's demands to save the deal were not met.