TEHRAN (defapress) – Hezbollah leader says that the Resistance is more powerful than ever despite the sanctions, while saying that Israeli enemy is in its weakest position than ever.
News ID: 78055 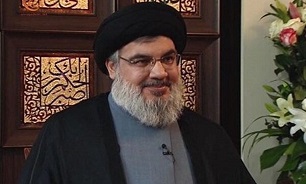 The Secretary General of Lebanese Resistance movement Seyyed Hassan Nasrallah made the remarks in an interview with Al-Manar TV on the 13th anniversary of 33-day war in 2006 on Friday evening.

Nasrallah said that the Resistance movement has created deterrence for Lebanon and pointed out the since the 2006 war, a major Israeli aggression against Lebanon has not taken place.

He asserted that the Lebanese have been living in security since 2006 and that they have achieved their unity now.

Hezbollah leader also noted that the Resistance is more powerful than ever nowadays.

He said that Hezbollah’s fire power was limited in 2006 contrary to its massive fire power today, which has been acknowledged by the Israelis themselves.

Hezbollah leader said that today, the Israelis have lost self-confidence in themselves, something that could be seen in recent war on Gaza.

Hezbollah secretary-general went on to add that the pin-pointing and precisely-guided missiles that Hezbollah has have the capability to hit any Israeli sensitive and critical targets including their nuclear sites located in its coastal borders at a depth of 20 kilometers inside Israeli occupied lands.

He noted that Israel is now weaker than the spider’s web now, highlighting that the future war with Israeli enemy will be much more devastative than the 2006 war and will put Israel on the brink of total destruction.

Elsewhere, Nasrallah referred to the US peace plan for Palestine dubbed “the Deal of the Century”, stressing that the plan will definitely fail.

He said that the status of the occupied Quds is the main reason for the failure of “the Deal of the Century”, adding that recognition of Quds as the Israeli capital will lead the plan to a total failure.

Hezbollah chief added that the unified position of the Palestinian groups on the one hand and the resistance of the Islamic Republic of Iran on the other hand are other major factors that will cause the failure of the “the Deal of the Century”.

Meanwhile, Hezbollah leader went on to add that the victory of Resistance forces in Syria and Yemen will also contribute to the failure of the century deal.

Lebanon's Hezbollah secretary general furthermore pointed to the absence of a strong Arab state to support the US plan and the chaos in Israeli regime and lack of a strong leadership there and widespread corruption in Israel as other reasons for the failure of the century deal.