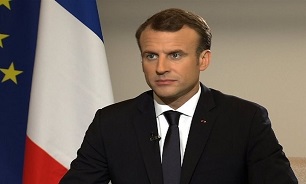 “The momentum we built over the last few weeks has, I think, prevented the worst from happening and overreactions on the Iranian side,” Macron told a joint press conference with his Serbian counterpart, Reuters reported.

“In these difficult conditions, we will continue our mediation and negotiation work,” he added.

The foreign ministers of France, Britain, and Germany held a meeting in Brussels on Monday to discuss the latest developments around the 2015 nuclear deal between Tehran and world powers. European Union foreign policy Chief Federica Mogherini was also present at the session.

Mogherini said the signatories to the nuclear deal, known as the Joint Comprehensive Plan of Action (JCPOA), do not view Tehran's move to scale back some of its commitments under the agreement as significant noncompliance and have not indicated any intent to trigger the accord’s dispute mechanism.

"For the time being, none of the parties to the agreement has signaled their intention to invoke this article," Mogherini told a news conference in Brussels, adding, "It means that none of them for the moment, for the time being with the current data we have had in particular from the IAEA, that the noncompliance is considered to be significant noncompliance."

Iran’s president announced on May 8 the suspension of some of the country’s commitments under the JCPOA, precisely a year after the United States unilaterally withdrew from the deal.

The JCPOA was originally signed between Iran and six world powers — namely the US, the UK, France, Russia, China plus Germany. Washington, however, unilaterally withdrew in May 2018.