TEHRAN (defapress)- Chief Commander of the Syrian Democratic Forces Mazloum Abdi warned Turkey against carrying out any military operation against the SDF in Eastern Euphrates, and said that any attack on any region in Eastern Euphrates will enggage all border regions of Syria into war.
News ID: 78133 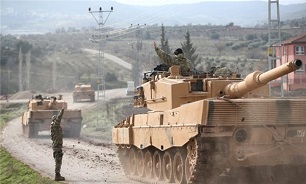 The Arabic-language channel of Russia Today (RT) quoted the SDF commander as saying that his forces will never let what happened in Afrin to be repeated.

Abdi, meantime, claimed that despite an agreement between SDF and the US on fighting the ISIL in Raqqa and Deir Ezzur, in case of any attack by the Turkish Army the Kurdish militias will stop their battle with the ISIL and it will retreat to border regions which will harm the agreement.

In a relevant development last Sunday, sources said that the Turkish Army was providing military training for affiliated militants in Syria to prepare them for a major offensive on the Kurdish militia in Eastern Syria.

The Syrian Observatory for Human Rights (SOHR) quoted informed sources as saying that Turkey’s intelligence body is planning to train the terrorists known as the Olive Branch and Euphrates Shield in Turkish military bases inside Turkey.

Meantime, Turkey has asked the terrorist groups under its umbrella, including those who have been trained in some Arab countries to stand tough against the Syrian Army, go under 20-day specialized military training that includes operating advanced and anti-Tank weapons, in Turkey.

The SOHR also noted that the Turkish Army had previously trained hundreds of terrorists under the name of military and security police at its military bases.

It noted that these measures are highly likely to be in line with the Turkish Army’s preparations for a major offensive on the Syrian Democratic Forces (SDF) in al-Furat and al-Jazira regions.