TEHRAN (defapress) – Iranian President Hassan Rouhani said Iran has always been, and will be, the key guardian of security and freedom of navigation in the Persian Gulf, the Strait of Hormuz and the Sea of Oman.
News ID: 78146 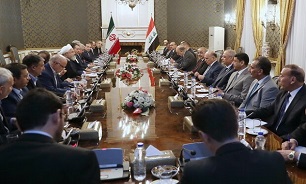 Speaking at the meeting of high-ranking delegations of Iran and Iraq, President Hassan Rouhani added that the Islamic Republic of Iran has no intention to escalate tensions in the region and with other countries, and will never initiate war and conflict.

"We believe that regional issues should be resolved through dialogue, negotiations and cooperation between neighbors and regional countries,” Rouhani stressed.

He then described meetings and visits of Iranian and Iraqi officials effective in development of relations and cooperation, adding, "fortunately in recent years, effective steps have been taken for deepening Tehran-Baghdad relations, and this trend will continue.”

During the meeting that was held on Monday evening in Tehran, Rouhani said, “the development of cooperation between Tehran and Baghdad will surely enhance the security and stability of the region.”

Referring to Iran-Iraq agreements on dredging Arvand Rud, the president said, "accelerating the implementation of this agreement is in the interest of the two nations and residents of its coastal towns in Iran and Iraq.”

Rouhani also went on to stress the significance of increasing cooperation in different fields such as railways, formation of joint border areas, energy, especially oil and electricity, the development of joint ventures, banking cooperation, as well as fight against drug trafficking.

For his part, Iraqi Prime Minister Adil Abdul-Mahdi, who was heading a high-ranking political and economic delegation to Tehran, said “the officials of the two countries are serious in implementing the agreements made during President Rouhani’s visit to Baghdad.”

"We need to work hard to secure and protect the interests of the two nations by expanding our relations,” he stressed.

"Iraq has never been, and will never be, part of the sanctions against Iran,” he added.

"The Islamic Republic of Iran has made many efforts in the fight against drug trafficking," he said, adding that the security of Iran and Iraq are interdependent and the common borders have to be protected.

Prior to the meeting, ministers of the two countries also discussed the latest progress of cooperation and implementation of the agreements at separate meetings.