US Employing MKO Terrorists in Psycho War on Iran 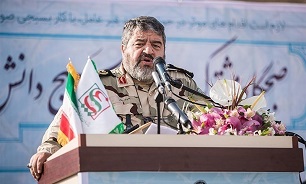 The MKO terrorists have always been puppets of the United States and, of course, they have an expiration date, Brigadier General Jalali said in a speech on Monday.

“Fortunately, Iraq has been cleaned of the MKO terrorists today but now they are present in a location in Albania and are pursuing new acts of treachery this time in cyberspace,” he added.

“The Americans are using the MKO in a cognitive war,” the official said, adding, “Many comments that are full of hatred, insults and mockery are uploaded by these very MKO members using fake accounts.”

Brigadier General Jalali further emphasized many news reports in cyberspace which are against the Islamic establishment of Iran are rooted in the psychological operations of the MKO that are based on lies.